The first scientific school of the OMA Project took place at CNAO in Pavia, Italy between 4th and 9th June, gathering 75 delegates from across Europe, including all OMA Fellows and their supervisors. Along the OMA School, CNAO also hosted a school of the Medicis-Promed project, providing opportunities for networking between two major European Training Networks that are supported within the Horizon 2020 Marie Skłodowska-Curie Actions (MSCA). Colleagues Hans Radhoe and Navrit Bal were there representing ASI in the event.
The event kicked off for both schools on Sunday afternoon with a tour of the CNAO synchrotron and treatment rooms, guided by local experts, Dr. Monica Necchi and Sergio Gioia, who explained the technical details of the facility and the patient treatment process. 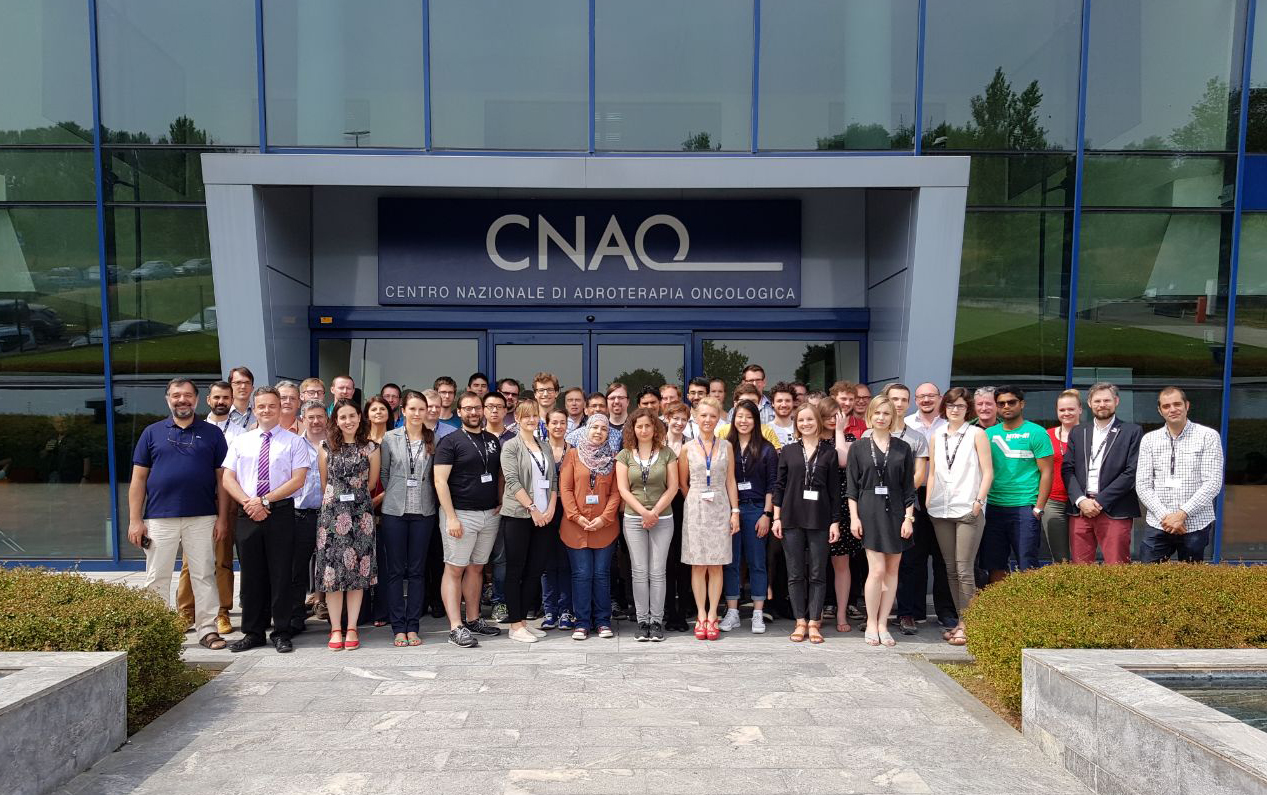 Participants of the OMA School on Medical Accelerators. 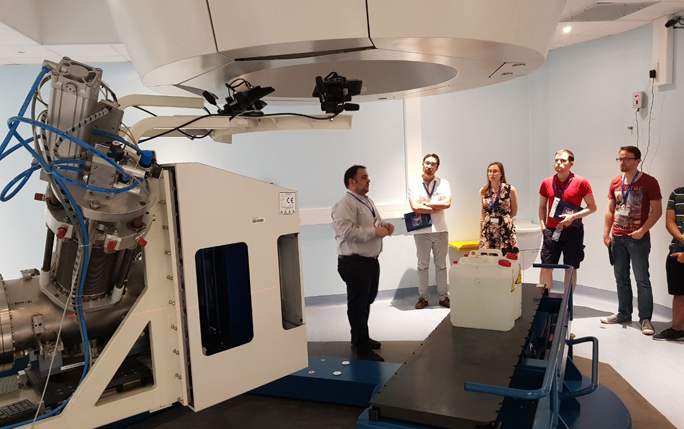 Visit of the accelerator facilities at CNAO.

The OMA School talks on Monday morning started with an opening word by Dr Sandro Rossi, and the school programme overview by Dr Monica Necchi, both representing CNAO. They were followed by the OMA network introduction by Magda Klimontowska from the University of Liverpool. The scientific part of the school started with lectures on the History of Medical Accelerators by Dr Tomas Vrba (Czech Technical University in Prague), and an Introduction to Radiation Therapy given by Prof Roberto Orecchia of CNAO. Monday continued with a focus on beam physics and diagnostics, with talks by Drs Javier-Resta Lopez and Ralph Fiorito, both from the University of Liverpool, and Dr Adam Jeff representing the company A.D.A.M. The day concluded with a dynamic questions & answers session, with contributions from the speakers of the day.

The second day focused on accelerator technology relevant for medical applications. Gabriel Gaubert (Pantechnik) initiated the day with a lecture on Ion Sources, followed by Dr Simon Jolly (UCL) contributing a lecture on Low Energy Beam Transport including the RFQ. The extensive programme of the day included sessions on Beam Manipulation by Dr Angeles Faus-Golfe (LAL-CNRS), the Cyclotron by Dr Eric Forton (IBA), the Synchrotron by Dr Fadmar Osmic (MedAustron) and Beam Extraction by Dr Adriano Garonna (TERA Foundation). The topics covered in the lectures were further discussed during the study sessions, where participants in small groups worked with supervisors on solving problems linked to lectures.

The day finished off with a public lecture ‘At the forefront of radiotherapy’ by Dr Marco Pullia of CNAO, which gathered participants of both, the OMA and Medicis-Promed Schools and an external audience from CNAO and the University of Pavia.

Starting from Wednesday the programme focused on medical applications of accelerators. Simulation Codes were discussed by Dr Sven Reiche of PSI, followed by a lecture on Accelerator Control Systems by Prof Luigi Casalegno from CNAO. The talks on that day finished with Beam Delivery System presented by Dr Oxana Actis (PSI), and Marko Mehle from Cosylab introducing the public to regulations applying to the use of medical accelerators. The afternoon included a social hike with a guided tour of a vineyard, providing an opportunity for further networking in the picturesque surroundings of Casteggio hills.

The talks on Thursday focused on Radiobiology (Dr Emanuele Scifoni, INFN), Treatment Planning System (Dr Adam Aitkenhead, Christie) and Image-guided Radiotherapy (Prof Guido Baroni, CNAO), followed by another study session in small groups supervised by the experts of the school. In the afternoon a poster session was organized, with fellows and students presenting their research projects, and joined by industry partners for a table-top industry display. The poster session was a joint event for both OMA and Medicis-Promed schools. The day was concluded with a seminar ‘New X-ray sources and approaches for imaging during therapy and intervention’ given by Dr Gil Travish from Adaptix.

On the final day of the school the audience learned about challenges and future perspectives for CNAO, presented by Dr Sandro Rossi and his team. The lecture on Patient Imaging was given by Dr Georgios Dedes from LMU. The event concluded with an industry session with contributions from OMA industry partners: ViALUX, Cosylab and IBA. OMA project coordinator Prof Carsten P Welsch finally drew proceedings to a close summarising the week’s main outcomes and successes.

All talks are available via the following website: https://indico.cern.ch/event/595518/