Congratulations to our founding institute Nikhef. Our founding institute Nikhef was directly involved in the detection of gravitational waves and lights in a spectacular cosmic event. During the collision of two neutron stars gravitational waves in form of ripples in space and time could be captured. The emitted waves were observable for about 100 seconds, afterwards a flash of light in form of gamma rays could be noticed for about two seconds.

In the following weeks after the collision other forms of light could be detected. Nikhef scientists observed this incredible event in cooperation with LIGO and Virgo. The detection of the merging of two neutron stars through gravitational waves and the observations with optical telescopes afterwards provide an entirely new picture of cosmic events. Distances in the universe can be determined in a new way and it has been established that the speed of gravitational waves does not significantly deviate from the speed of light. Finally, Nikhef director Stan Bentvelsen said that “this is the event of the century, which marks a new acquaintance with our universe.” 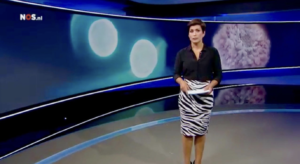